Researchers at Cedars-Sinai Medical Center and University of California, Los Angeles (UCLA) have found that a consumer-grade wearable - namely, the Fitbit, a personal activity tracker - can be a useful remote patient monitoring (RPM) device for patients dealing with heart issues.

Healthcare providers have historically regarded consumer-grade wearables with caution because they don't trust the data the devices gather and are naturally reluctant to make clinical decisions based on what might be inaccurate information. However, in a new study - published in the Journal of the American Medical Informatics Association (JAMIA) - Cedars-Sinai and UCLA researchers focused on consistency and adherence to continuous tracking device use, rather than accuracy.

They observed two things: 1) High rates of adherence and very low attrition among a group of mid-risk cardiovascular patients instructed to wear Fitbit devices, and 2) Data from the Fitbit could be used to identify trends that call for clinical intervention.

"Studies have indicated that device fatigue limits adherence, a phenomenon known as the law of attrition," the researchers wrote. "Little work has been done to demonstrate how readily available commercial devices may limit intervention burden by automating data collection, such as passive accelerometry. However, previous studies have shown that activity trackers are capable of accurately documenting health indicators such as physical activity, are a popular low-cost option with older patients, and often have higher adherence rates than other devices."

In the study, researchers recruited and collected data from 186 Cedars-Sinai Medical Center patients with ischemic heart disease (IHD). Participants were asked to wear a Fitbit Charge 2 for 90 days to monitor their activity, heart rate, and sleep.

At the end of the time period, it was found that patients had a high level of device adherence - 90% median usage. As the report notes, this is "substantially higher than those previously reported in telemonitoring studies using similar study periods."

The rate of attrition in adherence was measured at a 0.09% decrease per day - meaning that the vast majority of patients were still using their Fitbits almost as much at the end of the three-month study as they were at the start. Part of this superior adherence came down to the fact that, because the researchers were able to easily access the activity data, they could identify which patients were losing interest in wearing their Fitbit and send them a reminder. 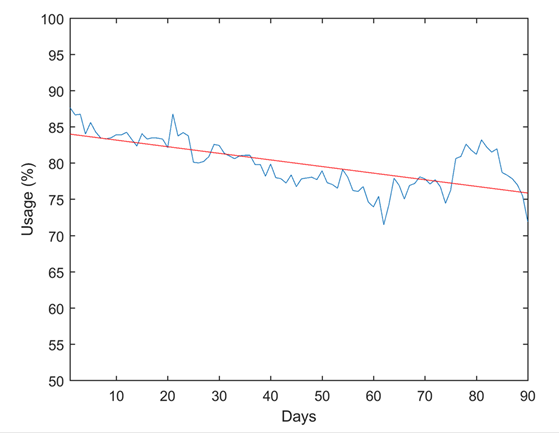 The researchers also wanted to see how the information gathered by the Fitbit tracker compared to that gathered from patient surveys at the end of the study period. The results were promising.

"The average number of steps recorded per day by subjects in this study correlated significantly with several attributes of the patients' self-reported states at the conclusion of the study, including their overall health, physical function, fatigue, and KCCQ (Kansas City Cardiomyopathy) and SAQ (Seattle Angina) scores," the researchers wrote. "These findings are consistent with previous studies that have found relationships between physical activity and health, as well as physical function. Here, the correlation between consumer grade activity tracker data and clinically used patient surveys demonstrates that these devices provide information about a patient's state, despite the imperfections in the data."

Ultimately, it was concluded that providers who monitor their patients through Fitbit trackers can gain actionable, real-time insight into their health and physical function - and, importantly, that this data is accurate enough to spot dangerous trends and trigger intervention.

Cedars-Sinai has been actively involved in researching the potential for consumer-grade wearables to improve patient care for some time. Earlier this year, for example, physicians at Cedars-Sinai Hospital once again used the Fitbit to track and improve recovery times for post-operative patients. They found that the wearable device not only helped doctors track a patient's movements but also helped motivate patients into activity, which is known to improve the recovery process and reduce treatment times - including days spent in the hospital.

An increasing number of remote patient monitoring research projects are relying on Fitbit devices - more than 600 studies have been published since 2012, with more than half taking place since 2017. The main benefit of using the devices is that, although they may not have the precision of their medical-grade counterparts, they certainly seem to be favored by patients. As Cedars-Sinai and UCLA's most recent study indicates, adherence is crucial for remote patient monitoring programs targeting people with heart conditions like IHD.

"Patients with stable IHD can develop precursor indicators that are not clinically detected, yet may progress to major adverse cardiac events (MACE) if not recognized, a potentially catastrophic and expensive outcome," the report noted. "There is a pressing need to validate and scale cost-effective techniques to monitor this large population between healthcare visits, and adherence levels relate directly to the feasibility of clinical use. [...] This study demonstrates that consumer-grade continuous-time activity trackers with HR monitors may be an effective tool for telemonitoring applications, as patients have demonstrated a high level of adherence and relatively low attrition over 90 days. These devices can record useful patient statistics including activity level, resting and active HR, and sleep time. These data correlate with clinically used patient surveys, and therefore might be an effective way of identifying patients who require intervention."

Download the Agenda today for more insights and information.